Archive for the ‘Ravelympics’ Category

Before indulging in a Japan roundup post, I should mention how I went in the recent Ravelympics. Sad to say, I didn’t complete my project. This wasn’t much of a surprise, as the only real knitting time I thought I would have during the Olympics was on the plane to Japan and a couple of longer train rides. What did surprise me was how little I achieved. 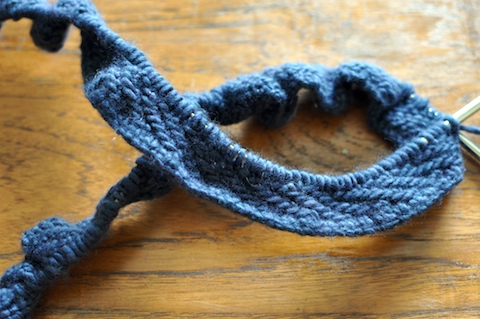 I made a mistake early on, and even the smallest mistake with Henry, unless caught very early, means a whole lot of ripping back. My enthusiasm drained pretty quickly at that point. On top of that, it appears I misunderstood the rules for taking knitting needles on international flights. Soon after takeoff, I was told knitting on the plane was not allowed as the change to the prohibited item list only applied to domestic flights. This didn’t seem right to me, as I’d heard of others knitting on international flights departing from Australia without issue, but thought it best not to argue.

So yes, my Ravelympics effort was a bit of a washout. That’s perfectly all right though, Henry will now be my project for the Bendigo Sheep and Wool Show. Given that’s still months away, it’s a much more relaxed goal and should (!!) be easily achievable.

Despite my previous claim about not having much time for knitting over the past couple of weeks, a little bit of knitting did occur; enough to finish off this fellow: 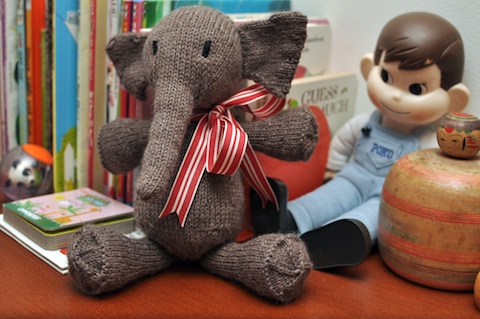 He was made as a thank you gift to our wonderful hosts in Tokyo. He was mostly done before we left, but his eyes and ears were finished while away. The only differences between this Elijah and previous Elijahs were slightly larger needles, accommodating for the slightly heavier yarn used (a 10 ply was used this time rather than the 8 ply used previously). I also used a little bit less stuffing, which makes him a bit easier to pose.

As this is the third time I’ve made Elijah, it’s hard to say whether this is now the end of my Elijah career. It would be good to try different patterns for toys as gifts, but at the same time it’s hard to go past him as he’s a fun and interesting pattern to knit, with such cute results.

Today marks the start of the Winter Olympics, but more importantly, Ravelympics. For those not in the know, it’s essentially a personal challenge to knit/crochet a project or spin yarn during the two week period of the games.

My knitting challenge is relatively meagre — another Henry, but in Malabrigo Worsted rather than Grignasco Tango, the yarn I used last time. I’m not 100% confident that I can finish it in time, but using a heavier weight yarn (therefore knitting up quicker) and a long day of travel in a couple of days will definitely help my cause.

I tested out the travelbility of the project yesterday when knitting the swatch on a flight home from a conference. You will all be pleased to know that it passed the travel test with flying colours (excuse the pun). The swatch was knitted up on 5mm needles, which I am concerned creates a fabric that is too rigid, but a former swatch knitted up on 6mm needles didn’t have great stitch definition, so the actual scarf will be knitted up on 5.5mm needles. The subtle colour variations in Paris Night come out quite nicely in the pattern too. The variation is not particularly noticeable except in the sunlight, but it’s a nice feature.

Going back quickly to the travelability — this week was my first time knitting on a plane since restrictions were relaxed. It was hard to shake the feeling of being a naughty kid trying to smuggle contraband into the plane cabin, but it was great being able to keep my fidgetty hands busy from gate to gate. I’m keen to see how much Henry can be completed on a longer haul flight.