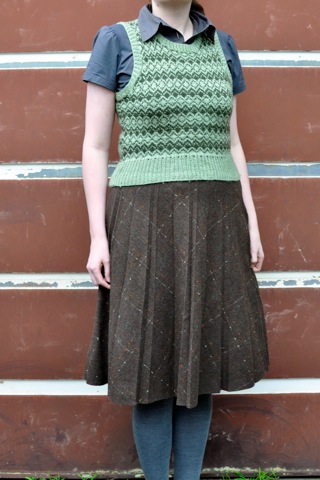 This is a vest made not long after I took up knitting again, and it’s one of my favourite knitting projects. When I started knitting again, I gravitated towards vintage and retro patterns. As it happened, I was a voracious op shopper at that time, and the op shops I frequented had a really good supply of patterns from the 40s-70s. The pattern for this vest was from the English Woman’s Weekly from 9 November 1974. 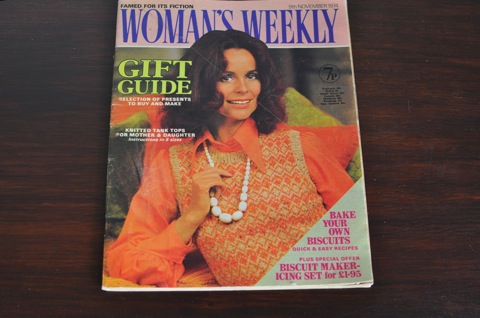 The colour combinations suggested in the magazine included grey and blue, amber and rust, oatmeal and sage and turquoise and grey. I was going through a green and brown phase at the time, so used a light green and olive green 5ply from the Bendigo Woollen Mills back room.

It was my first attempt at colourwork, and even now I’m pretty impressed with how it turned out. The knitting’s quite even and there’s pretty much no puckering. However, I never wear it because of a few rookie mistakes. The biggest problem is that it’s too short. This is probably because I used a 5ply instead of an 8ply yarn, and also suspect ‘gauge swatch’ was some manner of strange term I’d never come across. My increases are a bit… holey, even though I’m sure I knew how to do bar increases. So, while there’s not actually many mistakes, they’re pretty noticeable ones. 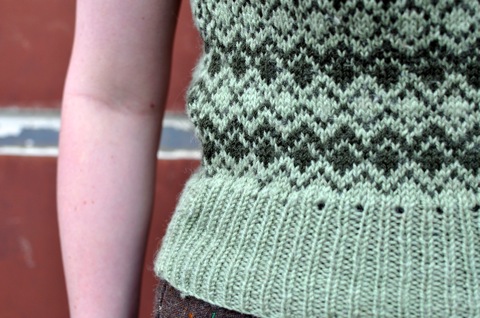 All that said, I can’t bare to unravel it. Even though it just takes up precious wardrobe space, I still feel proud when I spy it under the piles of knitwear. I definitely want to knit the vest again, but with 8ply and after a gauge swatch. It’s also a project that makes me feel a bit sad. I think it was a fairly adventurous knit for a relative beginner, and it makes me wonder where that sense of adventure went; after all, it’s only yarn and patterns are merely serving suggestions…

On the topic of serving suggestions and a sense of adventure, the magazine didn’t just have a snazzy vest pattern. Amongst other things, it also had a fantastic ad for a well loved foodstuff: 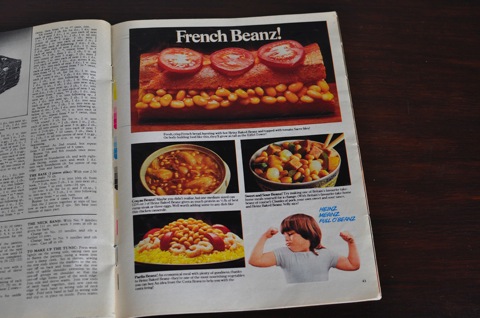 Anyone for paella beanz?

Posted in Knitting, Vest, Where are they now? | 8 Comments »

While deliberating on the fate of my Kalajoki socks, I started on another pair of knee socks. This year seems to be the year for making socks for myself, something I’ve never done before. It’s also perfect weather for knee socks; Autumn is barely a blip of a memory now as the very chilly days have begun. As I walk to the tram stop each workday, I think about how good it’ll be to have some knee socks to provide an extra layer of protection against the cold. 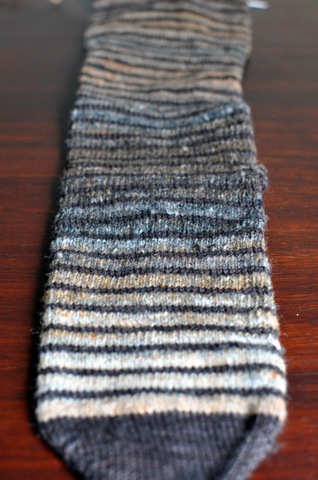 The pattern used for these socks is Laura Chau’s Delicious Knee Socks. It’s a good pattern, this one. While the sock itself is a fairly basic toe up, there are lots of foot width/foot length/calf width/leg length combinations which makes it very adaptable. 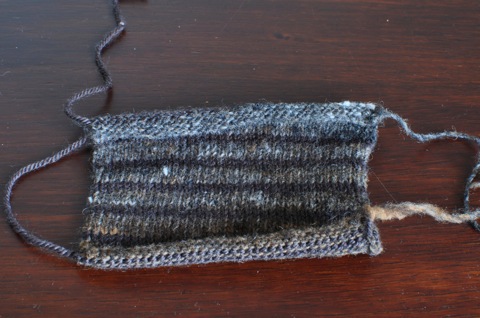 Getting a start on these socks has meant finally using some Noro Kureyon Sock I was given for my birthday a couple of years ago. Finding a good brown to stripe with the Noro proved to be quite a challenge, however Sweetgeorgia yarns came through with the goods with their Tough Love Sock in the espresso colourway. The swatch provided some concern as there wasn’t quite enough contrast between the Sweetgeorgia and the Noro for my liking. As it turns out, I swatched with probably the darkest part of the colourway; the lighter parts look really good against the chocolatey brown. With the lighter colours around it, the darker sections, which didn’t look so great in the swatch, look fine in the sock.

It almost feels like a waste to use the Sweetgeorgia with the Noro. The socks are turning out well, but I’m not getting a good feel for the yarn as I only get to use it in two round lots, with the exception of the toe, heel and cuff. That said, I have gotten a good feel for the espresso colourway and I’m completely enamoured with it. So much so that the search has started, and has maybe ended, for a way to use that colourway again. The frontrunner is the Callie Bib Tee, using Sweetgeorgia’s Merino Silk DK. This is quite an expensive yarn for me, but it’s amazing what a fairly spectacular appreciation of the Australin dollar can do for your yarn budget…

The little red socks that could

The aim for this year is to use up as much stash as possible. Not to avoid buying yarn per se, but to make stash the first port of call when starting a project. So far it’s worked fairly well; there was enough yarn in my meagre stash to make a vest, a cowl (with some help from an abandoned scarf) and a bolero (with some help from a knitterly stranger). These socks, however, have put an end the golden run of stash diving. 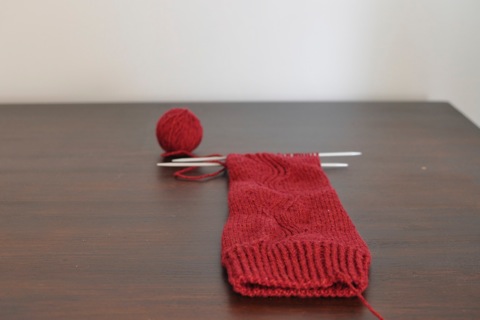 There were four or five attempts to try and squeeze a pair of knee socks out of the yarn I had stashed, but it was to no avail. Even with a pair of knee socks that was close to vacuum sealed onto my legs, there wasn’t enough yarn for most of the foot. There’s definitely enough yarn for a pair of ‘normal’, shorter, Kalajokis, but quite frankly it feels dirty typing those words. Red knee high Kalajokis or nothing, remember? 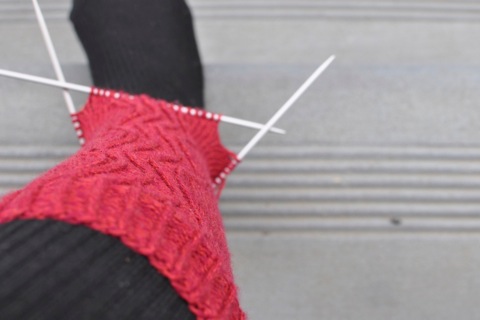 As it happens, the colour of the yarn (Bendigo Woollen Mills Allegro, in the discontinued colourway Scarlet) is pretty close to Patonyle 8ply in red. Let’s hope the seven balls purchased in the recent Clegs sale will be enough.

As for the Allegro, its future is uncertain. It’s a fairly splitty yarn, so while the colour is good and the fabric seems pretty hard wearing, it’s not the best to knit with. So back it goes into the stash, waiting for another pattern to come along. Hopefully next time round there will be enough to finish whatever I start!

Timeliness is a virtue

Normally Easter Sunday here consists of throwing a few Easter eggs around and calling it a hunt. Thanks to Not Martha’s timely post on papier-mache easter eggs, this year we took a different route. 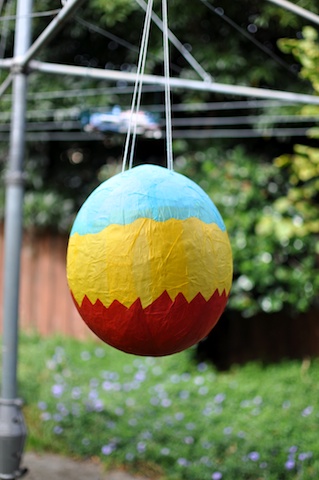 It was a lot of effort for five minutes of destruction, but I think it was worth it for the smell of Clag alone. Who knew that the smell of a water and flour paste would bring back memories of Primary School? I feel it’s probably appropriate at this point to point out that I didn’t eat Clag as a kid, and I wasn’t even a little tempted to eat some while making the piñata. 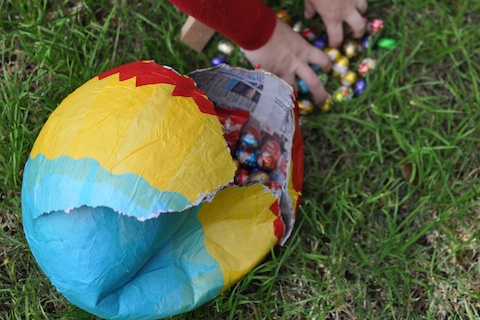 Next time (and there will be a next time), I’ll probably use fewer layers of newspaper and use a slightly less ‘Toy Story ball‘ colour scheme. It’d also probably be a good idea to put in lollies and toys that were a bit lighter than the solid eggs we put in this one; in the end we needed to use four anchor points to hold the weight of the piñata. However, we were still able to give it a bash, break it open and get the contents, and that’s all that matters really.

Hope everyone’s Easter breaks were, or continue to be, nice and relaxing!