I feel a bit bad for this project. I didn’t really want to knit it, but wanted a knitting project to take with me on a long bus trip. I didn’t really like how the crepe construction of the yarn looked in garter stitch. But now it’s done, I’m pretty happy with it. 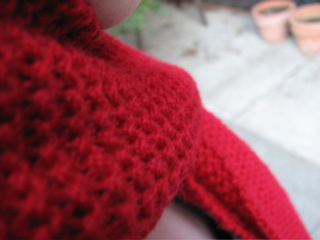 I’ve had a red garter stitch scarf on my mind for a while, and although I cannot seem to photograph red well to properly show it off, I thought it was the perfect red. 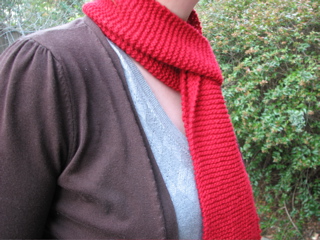 I like to call it a vanilla scarf, because garter stitch is quite plain, like vanilla, but it doesn’t stop it from looking nice. I’m still not 100 percent on using crepe for garter stitch, but I love the colour so much that I can look past that little annoyance.

It was quite exciting to discover that I can now start taking photos after work, because it’s becoming a lot lighter now that Winter’s on the way out. Usually I take all my photos on the weekend, but these photos were taken after work a couple of days ago. Granted, I was still in my work clothes, but I’m putting that down to the excitement of it being light outside at 5pm, rather than laziness.

There’s been a few things I’ve been wanting to blog about, but my blog got chewed up and spat out by my (now ex) hosting company. It seems a little out of date now, but I think I’ll still write about it anyway.

A couple of weekends ago, I was finally well enough to cook something else from the Women’s Weekly recipe cards. I opted for something a little different this time, apple gingerbread. The best way to describe it is a layer of stewed apples with a gingery cakey layer on top. On a slight tangent, I’ve noticed that the 70s (about when the recipe cards were printed) were very good to coconut and ginger, as a lot of the recipes contain at least one of those ingredients. Tis lucky I like both of them! 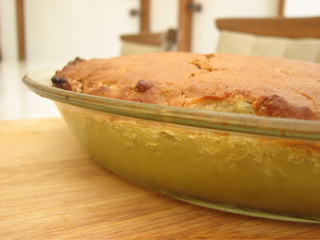 Getting back to the recipe at hand, besides nearly forgetting the brown sugar for the cake layer which no matter how hard I try, cannot really be blamed on the recipe, it was really easy. The hardest thing was peeling and chopping the apples, but if you were feeling really slack, you could use tinned apples. 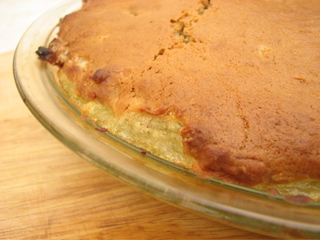 It flew off the pie dish so quickly! I made it in the morning, and it was well gone by the evening, just between the two of us. We are piggies indeed. Next time, I think I might try stewing the apples with a cinnamon stick, to give the apple layer a bit more flavour.

Salina has been a work in progress for quite some time, a year in fact. It was a project that I didn’t much confidence in from the get go, starting with worrying about the orange slubs in the yarn, and ending with the seaming job. Nevertheless, Salina is finished. 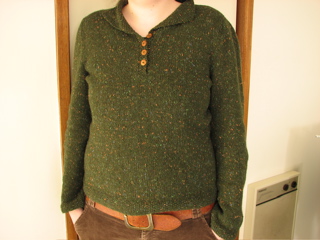 There’s really only one problem with it… it’s too big! The body fits ok, and is passable as a sloppy jumper, but the sleeves are just too big at the top. The sleeves look a little loose on the model, but not enough to fit a whole ‘nother arm in there. I’m not too disappointed though, I can see enough good in it to reknit it in a smaller size in the future.

The big lesson for today: don’t take so dang long to finish a jumper!

This is actually from last weekend, but unfortunately life got in the way.

When I was in primary school, we used to be sent home with catalogues of lollies, as a way of doing fundraising for our little school. It may just be residual childhood excitement, but I remember it being so much better than the current form of chocolate fundraising. Anyway, one type of lolly we used to get was coconut roughs. They were in the shape of a barrel, and as we all know, things taste better when they’re an unconventional shape. I was quite excited when I saw the recipe card for them, because I’d completely forgotten about coconut roughs until that point.

I don’t have a barrel chocolate mould, so I knew the taste would suffer somewhat, but I forged ahead with it nonetheless. They were extraordinarily easy to make, as it was a case of melting chocolate and copha together, then mixing the rest of the ingredients in. The results of forming the mounds were a bit mixed, however. 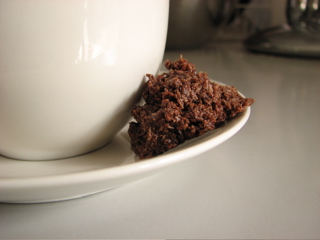 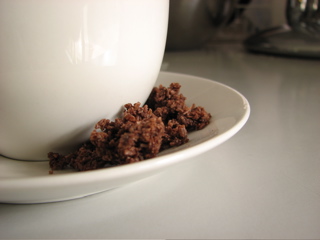 The early batches were good, forming little mounds like the one on the left. As the mixture started to set, they didn’t look so good. I don’t want to have to say mouse poo, but I can’t think of any other way to describe the results on the right.

Next time – there will be one, because they were so easy and delish – I’ll probably use a bit more chocolate, so they form a bit of a base for the coconut rough. I might even try to find a barrel chocolate mould, to make it taste better.

No recipe card challenge this weekend though, as I spent the weekend in Sydney, and I’ve come down with a nasty cold – two issues not conducive to cooking at home.