It’s been just over two weeks since starting the knee high Kalajokis, and there are about two and a half weeks to go until the Bendigo Sheep and Wool Show. I imagine there have probably been some sleepless nights as people worry about the status of my socks. Fear no more, for here is an update! 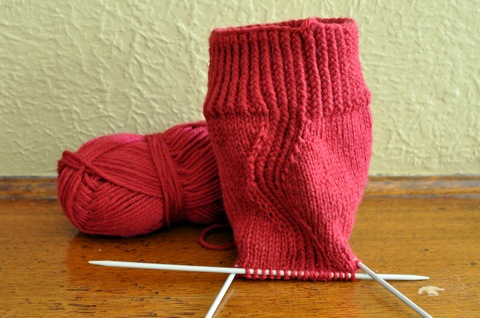 Last week I finished the right sock. The speed with which the first sock was finished caught me completely by surprise, particularly given I’m having so much trouble remembering the ‘river’ ribbing. My inability to remember the pattern is another surprise; with the number of times I have knit and reknit the socks with Bendigo Woollen Mills Allegro, you’d think I’d be able to knit these socks in my sleep… 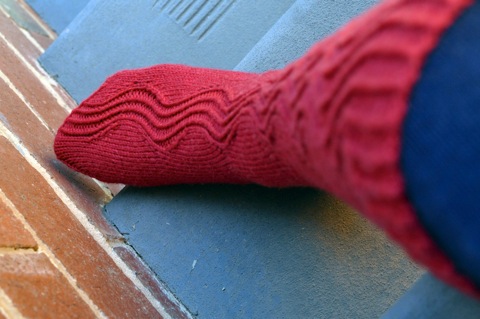 The Patonyle 8ply I’m using is lovely and soft, but I probably prefer Allegro for this pattern. Allegro’s tight crepe construction just feels sturdier, and the ribbed ‘river’ pops out a bit more. That said, I’m really happy with how the socks are turning out in Patonyle; they’re thick (perhaps even too thick for my boots) and warm, and it’s a really great red.

Progress on the second sock feels slow, but that’s probably because my mind is wandering to the next project. As fun as socks have been, it’s time I made myself a jumper. Or a cardigan. Or a different cardigan. Or a summer top… 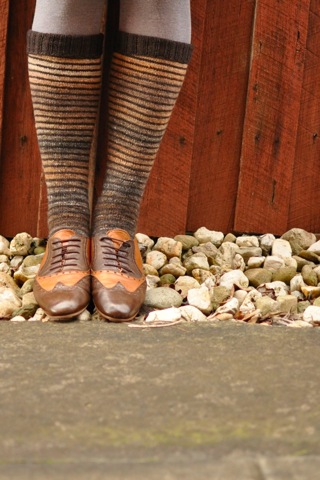 During the week I finished these socks. As mentioned in an earlier post about them, these are the first socks I’ve knit for myself and I’m smitten. The two yarns worked really well together and they are so warm, perfect for this time of year.

Working on the cuff in only Tough Love Sock meant that I got a bit more of a feel for the yarn, and I quite like it. The nylon content (20 per cent) makes it a wee bit squeaky, but it feels very hard wearing and I’m still completely enamoured with the espresso colourway.

There’s quite a bit of both yarns left over, so Matt may score a thin version of Turn A Square to wear under his bike helmet. But only if he’s good and keeps bringing me cups of tea after dinner. 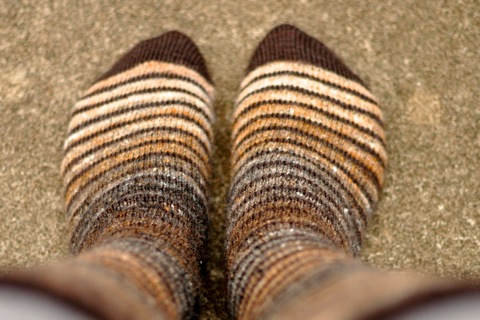 Another thing mentioned in a previous post was the pattern, and I still stand by what I said then; it’s a really good pattern and highly recommended it if you’re planning to make knee socks. Actually, the only thing I should mention is that the pattern has a short row heel. While that means you get a nice contrast heel, I’m not sure if I like how the short row heel turns out when you pick up the wrapped and double wrapped stitches. Are they any other forms of construction where you can get that kind of contrast heel? I’m pretty much a beginner when it comes to sock construction so I don’t really know… The heel aside, I’m contemplating making a non-striped pair of these in grey, and with the cabled seam variation given in the pattern. And maybe the over the knee version rather than just below the knee.

Finishing these socks means that the red knee sock challenge has commenced. I cast on the first sock on Monday, and I’ve now finished the leg and am onto the heel. Given it’s now just shy of a month before the Sheep and Wool Show, I think they might just be finished in time. Famous last words.

The Bendigo Sheep and Wool Show is next month, so my mind has turned to the most important part of the event: what knitting to wear. July in Bendigo is almost without fail freezing cold, making it perfect for showing off a knitted item or twelve. Last year I was a pretty bad ambassador for my knitting, with my Henry being the only handknit I wore. Matt, on the other hand, was a far better billboard for my knitting; he wore his suave sweater, Claudius and his Henry. As scary as it is that I can remember which handknits we wore, it’s probably even more frightening that we wore matching scarves last year. Keep an eye out for us this year, we’ll be the ones wearing matching jogging suits…

It’s a modest goal, but I’d like to finish the knee high Kalajokis for Bendigo this year. It’s probably more accurate to say start *and* finish as I haven’t started the Patonyle versions yet. In fact, the Allegro ones are still sitting on my desk waiting to be frogged. These things take time!

Before starting the Kalajokis, I should finish my stripy knee highs. Not that there’s too much to go now; I’m currently half way through the increases on the second sock. The increases on the first sock felt so slow, but on the second sock they signal the downhill run so they’re flying by. By sheer coincidence, the Noro stripes match up almost perfectly. I’d been mentally preparing for a pair of fraternal twin socks, but here I am with a pair of almost identical twins. Silly as it is, I feel almost let down that they’re turning out perfect. 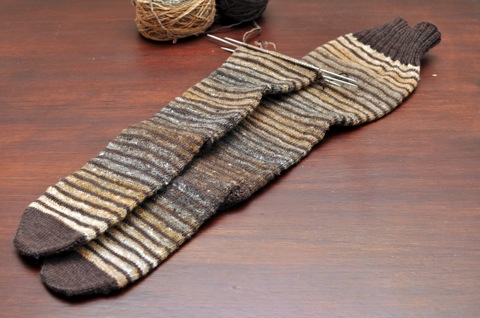 Last but not least, thank you everyone for your lovely comments about my vest. You’ve motivated me to not only try wearing it again, but to also start thinking about possible colour combinations for another vest. I could rip back part of the original vest and fix up the problems, but I want to keep it in its slightly dinky state. Making another one, a sort of do over, seems a pretty good compromise to me.