The gentle art of being a duffer 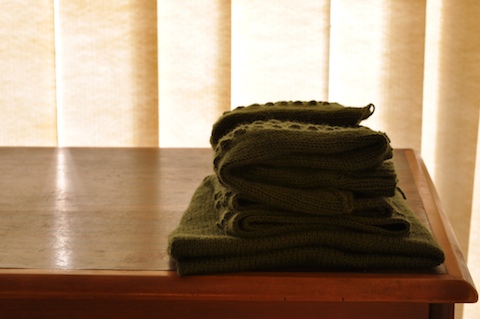 The four days off at Easter makes this place a hive of productivity. It’s not stressful like the Christmas holidays are and the weather is much more conducive to productive work. This Easter, I was determined to finish off all the major knitting for my Tyrolean Cardigan. Good Friday I sat down and knit and knit and knit and knit and faffed on Ravelry and then knit some more. Finally, yesterday afternoon, the second sleeve was cast off, folded it up and put it with the pile of Tyrolean Cardigan parts ready for blocking. At this point, I was feeling rather chuffed that I had finished something within the completely non-binding non-verballised timeframe.

Then I blocked it and marvelled at how nicely the stitches had settled the pieces were pinned out. It was then that something seemed amiss with the front pieces. No amount of pushing and pulling would make them look like mirror images of one another. Turns out one is 5 rows shorter than the other.

Normally I’d try to fudge it and hope that it’d look alright once it was seamed up, but it doesn’t seem possible in this instance because the bobbles draw too much attention to the discrepancy. Luckily my dufferism only occurred at the cast off and decreases for the neckline, so it shouldn’t take too long to fix. To be honest, I’m not sure how I managed to muck it up like that, but by golly it’s a good lesson in carefully checking over measurements before gleefully casting off and loudly proclaiming ‘Finished!’.

3 Responses to “The gentle art of being a duffer”