Yep, it’s new shade card time already. I heard rumblings that it was arriving this week, so I was more than a little antsy when the shade card was not ready waiting for me on Tuesday. I’m guessing for most of you this will be old news, but the compulsion to drone on about which colourways Bendigo Woollen Mills has decided are in and which are out overrides any concern about being behind the news curve. I get one opportunity a year to get my BWM colourway spreadsheet out (seriously), so I’m not going to miss it. 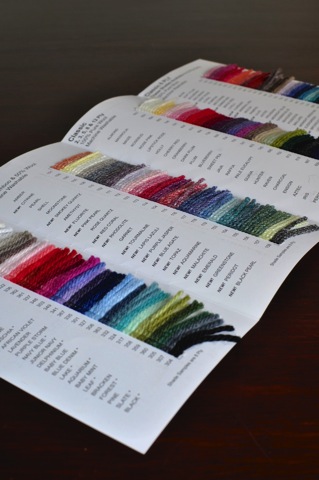 Here’s the summary of the difference between this year’s and last year’s shade card:

Interesting (to me) observations 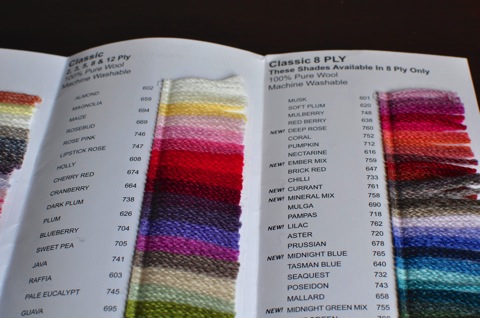 The biggest change in this shade card the the end of Rustic and the expansion of Stella. It’s ridiculous to mourn a yarn I haven’t used in years, but when I did use it, I really liked it. I hope that it comes back in some form, even as a limited edition release. Out of all the discontinuations, Rustic is the only thing I would consider panic buying.

Adding to my disappointment is the introduction of Stella into the main shade card. I’ve knit with bamboo blends a couple of times, and only once have I been happy with the results. So while I haven’t used Stella (there’s your grain of salt to accompany my opinion), I’m yet to be convinced by bamboo blends in general.

Some of the new classic colourways, specifically Midnight Blue, Midnight Mix and Claret Mix, are lovely. Midnight Mix and Claret Mix remind me of some of the marled colourways that worked so well in Rustic. I don’t think they work as well in a crepe yarn, but are still nice enough for me to consider purchasing some. The only drawback to them is the weight; a project I’d use them for calls for a 5ply crepe and these new colourways only come in 8ply. I’m never satisfied, obviously.

So, over to you. What do you think about this year’s shade card?