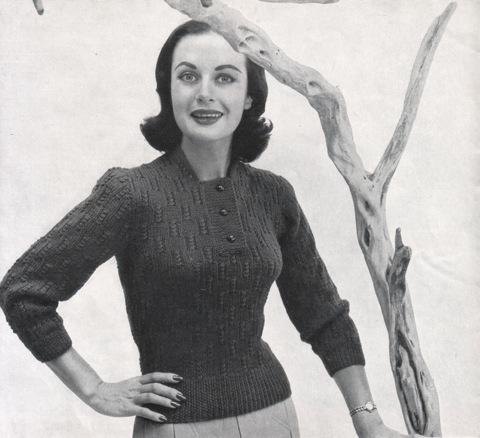 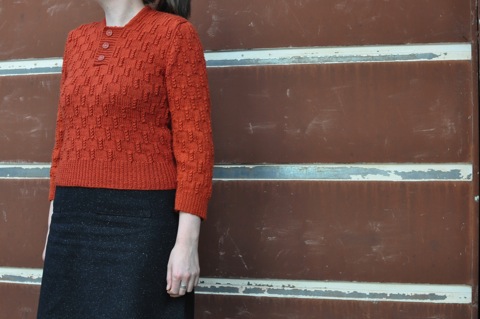 It is finished and I’m completely besotted with it. My confidence in it wavered a few times, but now that the buttons are on and I’ve been able to sneak in one wear of it before it gets too hot (thank you Melbourne weather), I’m very happy with how it turned out.

The orange is a surprise hit. As soon as I bought the booklet containing this pattern, I knew that orange would work well with it. The thing I’m most surprised by is how I like it, though it’s unlikely to replace grey as my go-to colour. 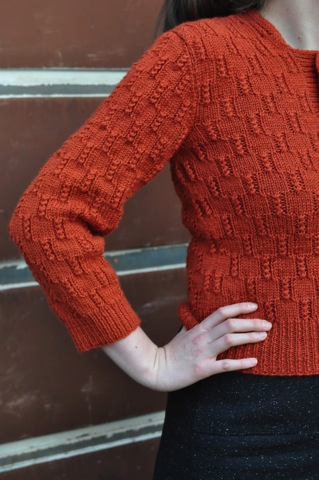 This project was another example of my inability to judge yarn requirements, as I ended up needing three balls from a different dye lot to finish the jumper. The dye lots were pretty close but still required a little bit of blending to make sure it wasn’t really obvious.

The yarn felt like a standard pure wool 8ply to me; the stitch definition was great and it held up well to multiple froggings. It feels a bit itchy against my neck but it’s nothing I can’t handle. The only thing I’m dubious about is its claim that it’s machine washable, because it felted like a dream when I used felted joins throughout the jumper. This one will never (intentionally) see the inside of washing machine for as long as its mine.

Buttonmania came through with the goods, button-wise. When I took the jumper in to Kate, I’d decided that dark brown leather buttons were the way to go. The buttons I walked out with are definitely not dark brown or leather, but I really like them.

As it was a pretty straightforward and fun knit, I’d really like to make the pattern available for others to knit, but have no idea how to establish whether it’s out of copyright. There’s no date on the pattern booklet, and as far as I know the company that produced the booklet is no longer in business. Anyone have any pointers on how I can go about establishing if it’s out of copyright, or getting permission to reproduce the pattern here? 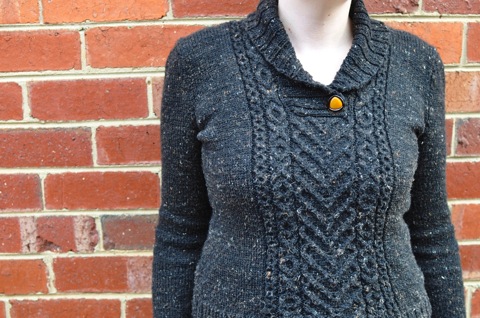 I Heart Aran is the second last of my old modern FOs from earlier this year. All the knitting and seaming was finished in time for this year’s Bendigo Sheep and Wool Show, but it took until a couple of weeks ago to sew on the button. Sometimes 10 minute jobs require months of mental preparation.

It’s the perfect winter jumper with its tweed and cables and a collar I can snuggle into. Even though I opted to knit it out of 8ply instead of aran weight yarn, I can confirm that it is an excellent shield against bitterly cold and wet days.

Because I made it out of 8ply, I made a heap of little alterations to the pattern to make the yarn/pattern combination work. I also lengthened the sleeves and used a three needle bind off at the shoulders rather than the suggested grafting. For a jumper this heavy, I think grafting shoulders together would lead to the jumper dropping; it’s really a spot that needs the structure of a seam. 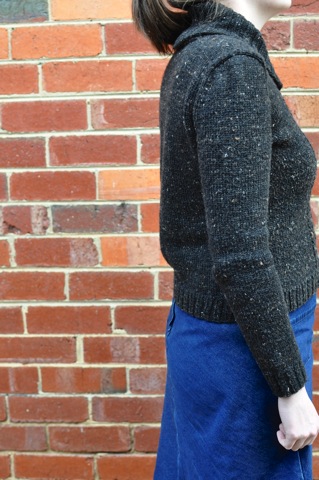 If I were to make it again, I’d make the body a bit smaller (it’s a lot roomier than I’m used to!), make the shoulders narrower and change the collar so that back of the jumper is cast off and stitches picked up, rather than using live stitches. Like the shoulders, I think a large shawl collar like this one needs the structure of a seam. Otherwise, it starts to collapse on itself like it’s starting to here: 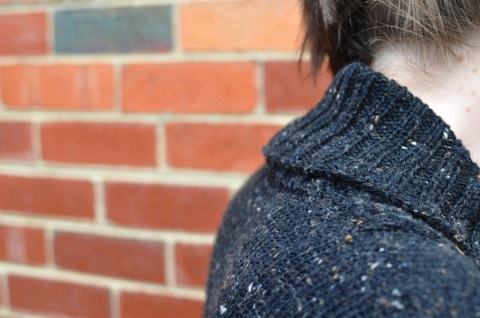 These concerns don’t detract from the jumper too much, but it makes it hard to recommend the pattern. I don’t think it’s a pattern you can blindly trust and follow; there are quite a few spots where more detail could be provided and better, more appropriate, techniques could be used. So, if you’re super keen to make it, I highly recommend having a really close, critical read through before casting on.

Lastly but not leastly, my absolute favourite part of this jumper has nothing to do with knitting. I picked up this vintage button not long after casting on, and I’ve been marvelling at its shiny butterscotch-like form and colour for nearly a year. I’m not entirely sure that it matches the jumper, but I’m so pleased it’s in use and no longer simply a desk ornament.

It came from Haberdash in Castlemaine, a place I cannot speak highly enough of. If you have even a passing interest in vintage crafts, this place is well worth a visit. It’s a treasure trove.

Where’s my WIPs at?

I know I’ve made a terrible grammar faux pas in the title, but it reminds me of a Basement Jaxx track with a somewhat disturbing monkey/human video. So, the grammar crime remains and I refuse to show any remorse for it.

Anyhoo, this is just a short update on my two WIPs. First up is a Variation of Cable Stitch.

It sits before me as an almost complete jumper and even though I’m the only one who has worked on it, I’m surprised it’s nearly there. Since last mentioning it, I knit the sleeves and made minor ‘edits’ to the front to make the neckline a little lower at the front. It’s becoming increasingly apparent that I do not sport a graceful swan-like neck, so I suspect I’ll be making a lot more of these kinds of modifications in the future. 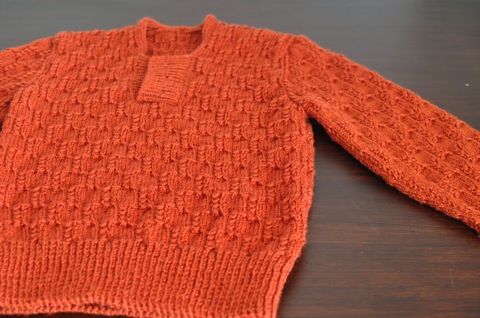 All that’s left to do is sew down the facings, give it a wash and then take it in to the lovely people at Buttonmania to find some buttons.

My other WIP is the brown jumper of immense frustration. Last time I mentioned it, I was getting increasingly annoyed at the hiccups I was encountering along the way. Since then, I’ve finished reknitting the button band and have almost finished one of the sleeves. It’s been quite the voyage of discovery, reworking those two parts of the jumper.

One of the things I discovered was the importance of seaming technique. On my first attempt at attaching the button band I used my default seaming method, mattress stitch, to attach the band to the body. Even though I had a lot of button band leftover, I didn’t realise that I was stretching button band out a lot. To show you how much, the strip of moss stitch sitting on top of the jumper is the original button band; it’s probably two thirds of the length of the current button band. 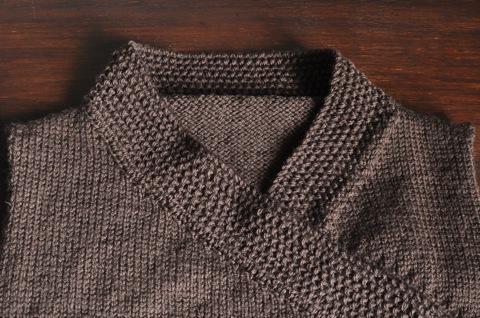 The other thing I realised was that there was absolutely no chance of easing the sleeve into the armhole on my first attempt. This was primarily because I’d cast on 10 stitches less than I was meant to, and had, in turn, knit 10 rows more than I was meant to. This spectacular misreading of the pattern is probably my best bout of dufferism of late.

Even after removing the 10 extra rows, the sleeve would still probably be a bit too big. I’ve made the sleeve smaller again, and even though it’s looking a lot better, the lack of precision is upsetting me a little. If I wasn’t so far into reworking the sleeves, I would definitely use this tutorial from By Gum By Golly. It would pretty much solve all of my problems (except the whole duffer thing).

How about you, where’s your WIPs at?