I’ve gone off my knitting at the moment. While I wait for the joy of knitting to return, I’ve been doing some sewing.

My relationship with sewing is a slightly strange one; I really like the idea of making my own clothes, quilts, bags etc. but making the leap from thinking it’s a good idea to actually sitting at a sewing machine has always been a challenge. I’ve made a couple of garments in the past which turned out OK, but have never felt particularly comfortable or confident when using my machine. It’s a skill that hasn’t yet clicked for me like knitting did, which has meant that every little hiccup along the way has been met with frustration rather than an acceptance of it as part of the learning process. Really, why can’t it just work?

After finding a great little metal body Bernina at an op shop late last year (I’ll save that tale for another post), I began to get frustrated at the fact I kept getting frustrated with sewing. Like a dog chasing its tail, my frustration went around and around, faster and faster until I stopped and found a sewing e-course that looked interesting. It started at a point below my current level of sewing knowledge, but to my mind that was a good thing; it would help to reinforce the fundamentals I learnt in Year 7 textiles. 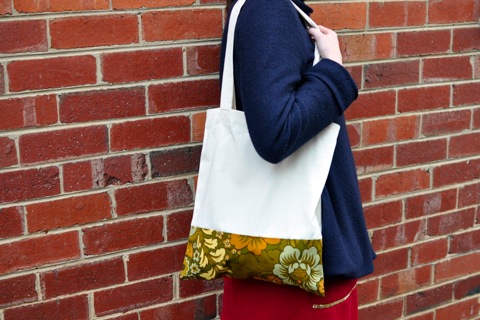 The most recent project I made from this course was this tote. It’s quite a simple project, but I’m really happy with how it turned out. I deviated from the pattern a little bit by shortening the side panels and adding a contrast panel down the bottom and it worked out just fine. The contrast panel is some upholstery weight fabric I found in an op shop years ago. It was found on a rainy day, a couple of hours before my shift started at work. I distinctly remember holding onto this small bolt of fabric (the cardboard tube had broken so it was flopping around all over the place), trying not to let it get too wet or hit fellow commuters while taking multiple forms of public transport to work. It was one of my more awkward commutes and it must have been at least a little bit embarrassing for my poor friend (and workmate) who was shopping and then commuting with me.

Yes, anyway, this tote. I’m still a long way from being able to make my own clothes, but this project feels like a turning point. There were a couple of times where things didn’t go quite to plan, but it didn’t elicit the usual response of frustration. I just stopped what I was doing, got my seam ripper out and started again.

As for the course, I have mixed feelings about it. There are a couple of little things that I’m concerned about, but I’ll wait until I’ve completed more of the course before posting my thoughts. In the meantime, the course has meant that I’ve been sewing and I want to keep sewing. The sewing outlook is positive so far, and that’s the most important thing. 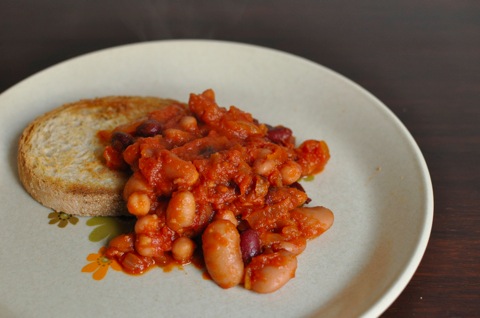 There’s a cafe not too far away from my house called Little Deer Tracks. Among other things, they make very good baked beans. As much as I’d like to be eat breakfast there every day, it’s not really possible or financially sensible. The only solution to this is to make my own baked beans for those times I can’t enjoy Little Deer Tracks’ baked beans.

The recipe is adapted from the DIY Baked Beans recipe on Taste.com.au. It’s a little different to the beans I’ve had at Little Deer Tracks, but they’re still good in their own way. This amount should easily feed two to three people if the beans are the main part of the meal, and four or more if it’s a side dish.

The year of the vintage pattern

Last Saturday the Brunswick Mini Wool Expo was held at the Brunswick Town Hall. It’s a pleasant way to spend time on a Saturday morning, running into and chatting with friends, looking at yarn and, in my case, sorting through old patterns. I didn’t buy any yarn this year, but did spend quite a bit of time going through piles and piles of old patterns. In the end, I picked up quite a nice collection of bits and bobs to add to the pattern stash. 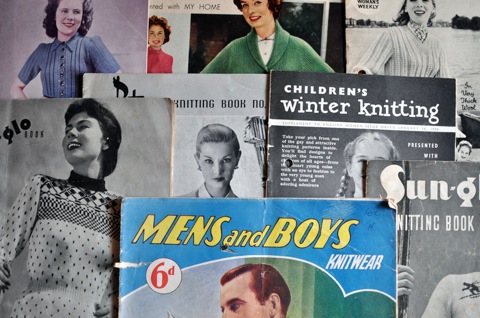 There are lots of patterns in this mini-haul that I would knit, but this one is my favourite: 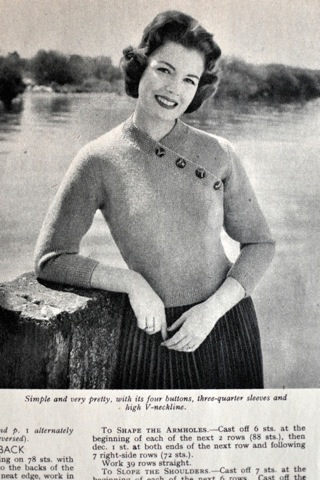 There’s nothing particularly exciting about a stocking stitch jumper with seed stitch trim, but it does remind me of a jumper worn by a lady in a vintage shop I visited nearly ten years ago. Even though it was a long time ago, I still remember it pretty well; it had the same high cross over, but it didn’t have any buttons and the sleeves were a tad longer. It’s a jumper that I’ve wanted to make for myself, and I even went so far as to sketch it a couple of times. Like a lot of things, it never got past being a kernel of an idea, so I was really excited to come across this pattern. It’s unlikely that I’ll be making it this year, but I’ve started thinking about colours already. So far light yellow, mustard yellow and brown are the front runners.

It’s always fun to pick up ‘new’ vintage patterns, but this mini-haul also reminded me that my pattern stash is a bit of a mess at the moment. I really need to sit down and spend some quality time with both my yarn and pattern stashes to get them more organised and to also pare them down. The biggest problem I have with my vintage pattern stash is that I never seem to use it. The hunt for ‘new’ pattern books is always fun, but that seems to be where it ends. There’s very few patterns that I’ve collected that have turned into finished objects, and yet they’re some of the projects I’ve been most proud of.

Perhaps next year can be a year of vintage patterns? There are certainly more than enough patterns in my stash that I’m interested in making, and by then my yarn stash should be small enough to accommodate more yarn… I might be calling it too early, but I’m going to do it now. 2013 is going to be a year of knitting from vintage patterns.