Once, twice, three times a beanie (aka Goldilocks and the three beanies)

A little while ago, I decided to knit a beanie as a gift for a friend. I had a hat’s worth of yarn in stash in a colour that suits her very well, so it seemed that fate had intervened and the project was obviously meant to be.

Initially I cast on for Porom. The twists looked a bit puffy, but mostly it looked good. That is, until I finished it and blocked it. What was once a nicely-sized slouchy beanie had turned into a perfectly good shopping bag, without handles.

Slightly disillusioned but as stubborn as ever, I ripped it back and reused the yarn in an Icing Swirl Hat. It soon became apparent that it was far too small. So again I ripped the hat back, and soaked the kinks out of yarn. The yarn was starting to lose its structural integrity by this stage, and my disillusionment was starting to grow. As was my stubbornness, for that matter.

I don’t have photographic evidence of either of those mishaps, which is quite fortunate as it means I’ll most likely remember that yarn as this beanie: 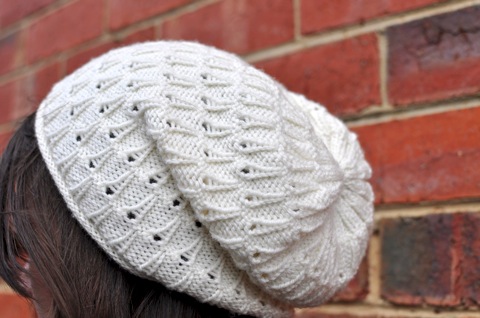 The pattern hadn’t been long published when I knit this beanie up. It was a nice easy knit, with just enough variation to make it interesting. Having two beanie failures ended up being a blessing in disguise — of the three patterns, I think this one turned out the best and I’m really pleased with it. 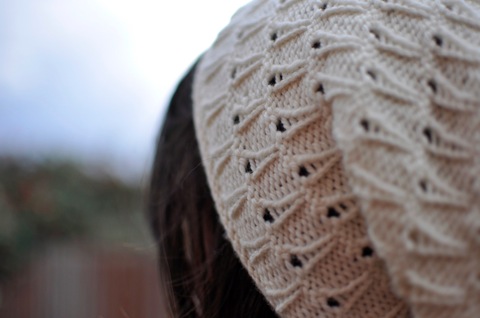 This isn’t the first time I’ve used Luxury, but I must admit I’m a bit frustrated with it. While it’s a lovely soft yarn and comes in quite a few nice colours, it drops quite a lot after its first watch (see Porom). Sadly, I don’t think this is an uncommon problem. I had been planning to make a few bigger things using Luxury 4ply, but I am now a bit Luxury-shy.

Who would have thought all of this was down to not swatching? I tend to swatch for larger garments, but take for granted that for something relatively small, like a hat, would be ok without a test swatch. I have learnt my lesson.

6 Responses to “Once, twice, three times a beanie (aka Goldilocks and the three beanies)”