Every now and again, I receive emails from someone looking for a particular recipe from my set of Women’s Weekly recipe cards. Often they’re looking for recipes that they, or someone in their family, used to make when the cards first came out. While the cards are long gone, I find it interesting that the memory of the recipe, or more, the resulting dish, endures.

Recently, I received an email asking if I had a recipe for peanut slice. It was one of those recipes what wasn’t in the photo of the card — a bonus recipe, as Pip calls it. When I went searching for the recipe, I imagined something chocolatey and biscuity. My perception was completely wrong, as it was a concoction of flavours I’d never imagined before — beer nuts (peanuts with their red skins on), coconut, raspberry jam and cornflakes! I was skeptical, but it had me so intrigued that I had to make it. 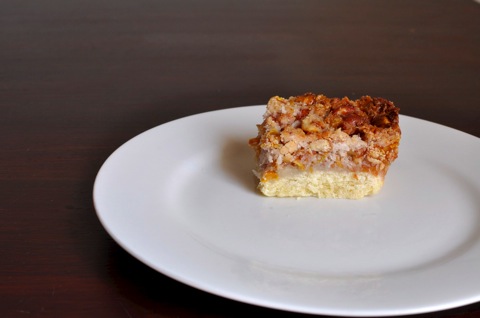 You know, it wasn’t half bad! It certainly was a strange combination of flavours, but it was certainly quite edible. Unfortunately I don’t think it quite worked out for me, as it was quite crumbly. As the recipe called for whole peanuts, the slice would just fall apart as I tried to cut through the soft topping.

I’m quite sure this is because of eggs. I don’t use eggs in cooking, and the topping required stiffly beaten egg whites, something I’ve not been able to find a good substitute for. I suspect the egg whites acted like a glue to make the topping firm and easy to cut through. It was a little disappointing that it didn’t work for me and for that reason, I’m hesitant to post the recipe — let me know if you’re interested and I may post it at a later date. Despite the slight disappointment, it was a fun experiment!