Where are they now? – Tyrolean Cardigan edition

Thank you for the thoughtful comments on the last post. It’s really interesting to read other people’s perspectives on comments, commenting and motivation for blogging. It’s given me a lot to think about.

Changing the subject completely, I’m always interested to see how finished projects fare down the track. Often a project’s blogging life ends soon after the project is finished, which means you don’t know whether the item got much use and what improvements would be made if it was made again. A recent epiphany about a finished project has provided the motivation to start a periodic ‘where are they now?’ series.

My Tyrolean Cardigan was finished about a year ago, but it’s only been worn a handful of times. I decided that the button band was the reason I wasn’t wearing it very often – I wore it to work recently and found I fiddled with it a lot. 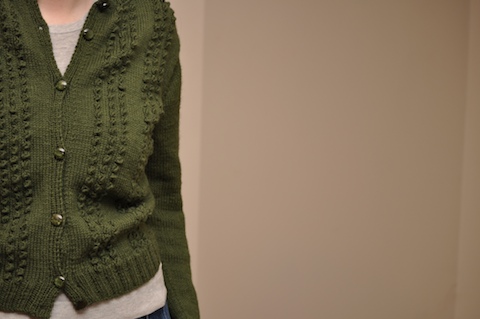 The button band was originally worked as in the pattern – seven buttons, with two spaced close together at the top and bottom. In this configuration, the front gaped a little, even though there was enough fabric to cover me. The buttons at the top and bottom were also largely redundant because I wore the cardigan with only the middle buttons done up, to help it nip in at the waist more.

A few potential solutions came to mind, but I ultimately decided to pull out the button band and start again. This time, I added an extra buttonhole and spaced them out more evenly. This required a bit more surgery than anticipated, as the neckband needed to be reknit as well.

I’m pleased to say it’s a lot more wearable now. It was taken for a test drive yesterday and I didn’t fiddle with it at all! Adding the extra buttonhole made all the difference, which is unsurprising given that the body was knit a bit longer than specified in the pattern. 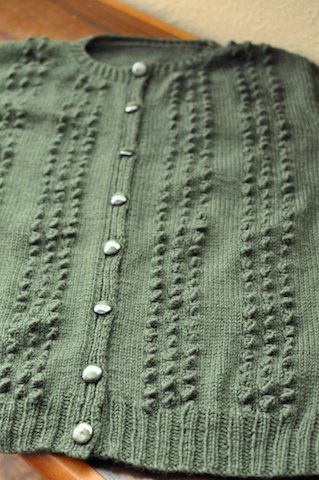 As for the rest of the garment, I still really like the bobbles, the colour and the button choice. Being a very warm cardigan, it’s coming into its own now we’re on the Winter side of Autumn. Probably most importantly though, the fabric is holding up ok. There’s a bit of pilling under the arms, but as the rest of the cardigan is remaining pretty much pill-free, I’m reasonably satisfied with how it’s wearing.

The ‘where are they now?’ series is unlikely to feature all of my past knits, as not much interesting stuff can be said about a garter stitch scarf. However, I may be able to slip in a few pre-pransellknit knits that might be a bit more interesting…

Posted in Cardigan, Knitting, Where are they now? | 7 Comments » 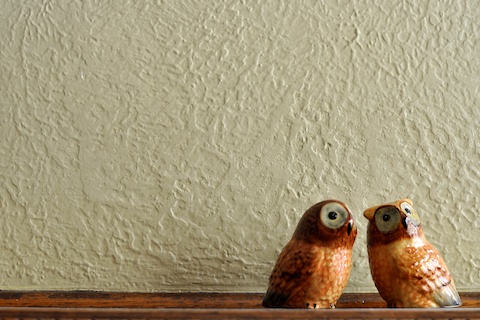 Thank you for the kind comments and suggestions regarding my last post. As Michelle mentioned, I think at least some of it has to do with the change in the weather (no offence, Autumn). Knitting-wise, I did take Bells’ advice and started on something in my Ravelry queue that will fill a gap in my wardrobe. It’s not quite bloggable yet, but it will be soon.

While on the topic of comments, a couple of interesting conversations about blog comments and replying to comments have occurred recently. It made me think about how I acknowledge comments on this blog, and whether they are within the bounds of good blogging etiquette.

Receiving notification that I’ve got a comment on my blog truly makes my day. It amazes me that people find the content of my blog interesting enough to comment on. It makes me feel part of a community, for want of a better word, and provides me with the motivation to keep blogging; to try to find ways to make the content more interesting. It’s also made me realise that other bloggers must value comments as well, and as such, I comment a lot more frequently than in the days before Pransellknit was around.

All of that said, I really don’t know if I show my appreciation for comments sufficiently. Correspondence is not my strong point, so my way of replying to comments is a mishmash of email, responding in a subsequent post and commenting on the commenter’s blog. Sometimes I don’t reply at all, though this is usually only if the comment doesn’t include a question or I’m familiar with the blogger (in that we comment on each other’s blogs regularly). Now that I’ve said I occasionally don’t reply, it seems rude. Is it?

As a commenter, I don’t expect a reply, but it’s nice when I receive one. Again, I don’t know if this is the norm.

I’m really interested to hear what other people’s opinions are on comment-replying etiquette. As a commenter, do you expect replies, and if so, how do you like that reply to come to you? If you have a blog, do you have a policy for replying to comments? This is all very unscientific, but it’d be nice to continue the discussion, and see if should be showing my appreciation to commenters a bit better.

I’ve been a bit restless with my knitting lately. Swatches have been knit, but I don’t feel particularly drawn to any one pattern. This is a bit of a problem because it creates a small knitting vacuum; besides one secret squirrel project, I don’t really have anything on the needles, but I feel I should be doing something.

The current knitting situation seems to be a good reflection of my non-knitting life of late. I have niggling feeling, that I can’t articulate and can’t work out why it’s there. This means I can’t work out how to fix it, which starts the restlessness all over again. ‘Tis quite a frustrating cycle.

All of this started soon after finishing these knitterly morsels, and thus it’s only fair that they are blamed for this bout. 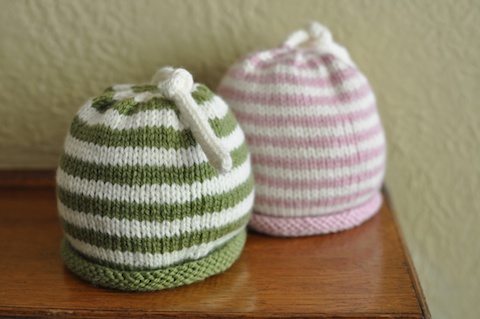 A couple of the guys at work recently became fathers for the first time, which presented a prime opportunity to knit baby hats. I suspect the hats are a bit big for newborns. However, I have it on good authority that babies grow, so the size shouldn’t be too much of an issue.

The yarn, Bendigo Woollen Mills Luxury 8ply, is really good for baby knits. It’s lovely and soft to knit with, has a good range of colours and is machine washable. I think Luxury 4ply would work well with some of the vintage patterns I have earmarked as future projects.

The pattern is from Stitch n Bitch, the first knitting book I bought after starting to knit again. Although the book is really well worn, I’ve only made a couple of things from it and was recently contemplating giving it away. These hats prove that reference books should almost always be kept (my second year Business Finance text book is an exception to this rule).