There were high hopes for a productive Easter break, with lots to blog about. In reality, I came down with a bad cold on Thursday, and have only been able to potter around in dribs and drabs for the last two and a bit days. The cold’s impeccable timing is a little frustrating, but what can you do?

Despite the reduced productivity, I managed to finish Somerset yesterday. 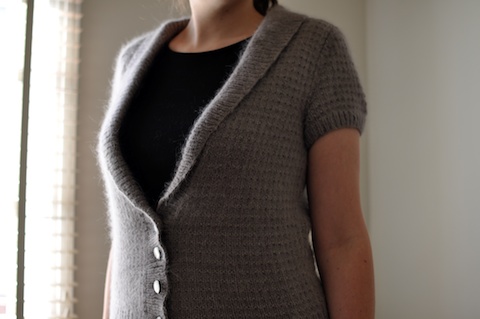 Although a few modifications were made (which were largely to do with gauge) it’s a nice straightforward knit. The end product is maybe a little big around the shoulders, but it’s still quite wearable. I might need to work on smoothing out the collar edge a bit more, but it’s looking a lot better now than it did when it was first finished: 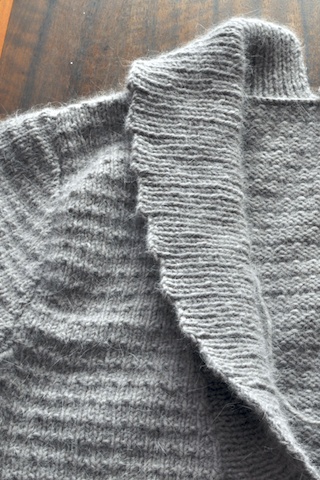 The yarn created a very soft and warm fabric and I think it worked well with the pattern. It did tend to break if I was a bit rough with it though, and being an angora blend, it sheds like no one’s business. It was particularly nice to find a use for the yarn as I purchased it over five years ago. I originally intended to use it for a pattern that called for 4 ply angora yarn. As Angora Supreme is around 10 ply, the initial swatches required 2mm needles in order to get even close to the required gauge. My sanity and fingers are very glad that project didn’t get past swatching. 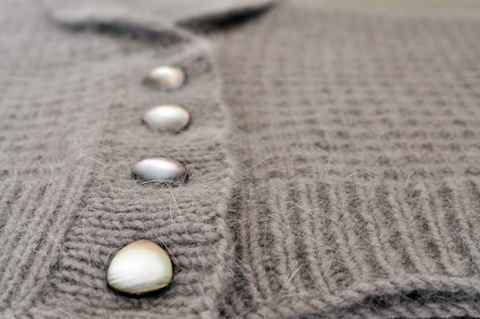 The real star in this project is the buttons. Without venturing too far down hyperbole lane, I think these buttons are truly things of beauty and match the cardigan really well. They were purchased from Buttonmania, a button wonderland in Melbourne CBD. The buttons were purchased by the owner of Buttonmania in a collection of 33,000 (yep, thousand) buttons. She showed a lot more restraint than I in that situation; I’d be sorely temped to dig a pit, empty the buttons into it, and dive in, Scrooge McDuck style.

On an unrelated note, it was a relief to read that I’m not the only one that dislikes ribbing. I felt a bit guilty being so negative in my last post; it’s not reasonable to think that I’d like absolutely every aspect of knitting, but I still felt bad whinging about something I do for enjoyment.