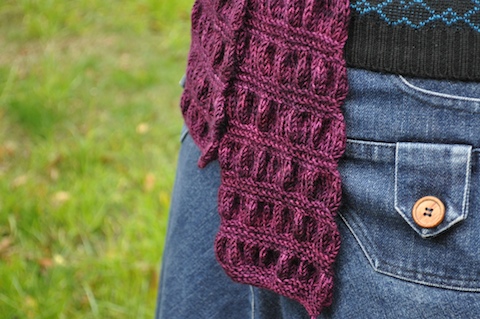 All up this took 3 weeks at most, which is quite surprising given the yarn and needle size. I highly recommend it as a commute knit, even with the needle changes, as the easily-remembered pattern makes it a good ‘pick up, put down’ project.

While purple isn’t my colour (the scarf is intended for someone else), Velvet Plum has made me fall for semi solids. I doubt I’d ever use semi solids for a larger item of clothing, like a jumper, but in small doses I think it’s terrific. Particularly with this pattern, the variation in colour works in well with the gathered stripes.

Unfortunately I’m now at a loose end, commute knit-wise. None of my current projects are really suitable for commute knitting, yet I’m reluctant to start another. Quite the conundrum.