Archive for the ‘Gardening’ Category

This season I decided to have a go at growing peas. Things were looking promising when 8 little sprouts sprang up from the soil, but only one really kicked on. I noticed a couple of flowers on it a week or so ago, but didn’t think much of it. Today when I checked on them, there were pea pods! I’m trying very hard to be patient and leave them for a couple more days before picking them. 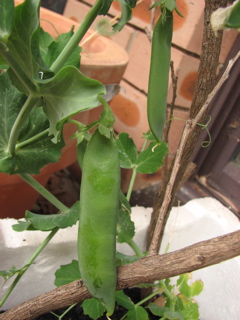 It’s such a satisfying feeling growing veg, even if there’s really not enough to make even one meal out of the crop. I’ve grown tulips before, and while they were very pretty, it just wasn’t quite the same as growing peas or even herbs.

The mild success with the peas is perfect timing, as I was planning on putting in some more peas this weekend, as well as some chilli and capsicum plants, and I’m now even more motivated to give it a shot. Here’s hoping they do alright!