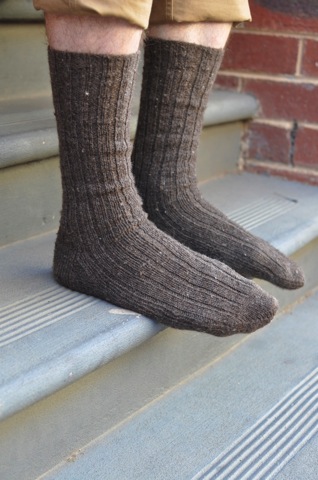 These socks were part of Matt’s Christmas present last year. They were knit on public transport, at Stitches and Bitches and at various other points in time where Matt wouldn’t see them in progress. Evidently I did a good job of hiding them, because he was thoroughly surprised (or so he tells me).

Both the yarn and the pattern came from Bendigo on the Sheep and Wool Show weekend. The yarn was from Corriedale/Romney sheep from a farm just outside of Bendigo, and the pattern from a stack of vintage patterns I picked up from the Sheep and Wool Show. I generally not location-loyal when it comes to buying things, there’s still enough hometown pride left in me to be tickled by the Bendigo-ness of it all. 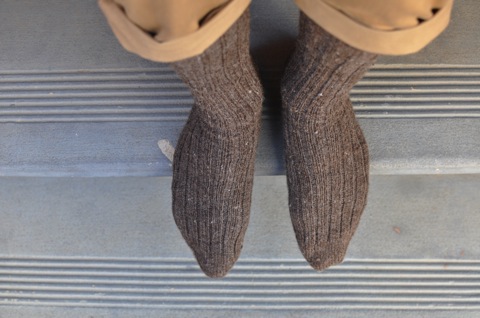 I think these socks are one of the best yarn/pattern combinations I’ve ever come across. The socks are pretty basic ribbed socks, but the rustic, slightly slubby texture of the yarn lends itself well to a fairly plain ribbed sock.

The yarn was quite good to work with. It still had a slightly greasy texture from the lanolin left in it, and there was a little bit of vegetable matter that was fairly easy to pick out as I went along. It turns out I quite like working with that kind of toothy, unrefined yarn; it’s not something I’d really want against my neck, but even without nylon in it it seems tough enough to handle the wear and tear of being sandwiched between a foot and a boot. 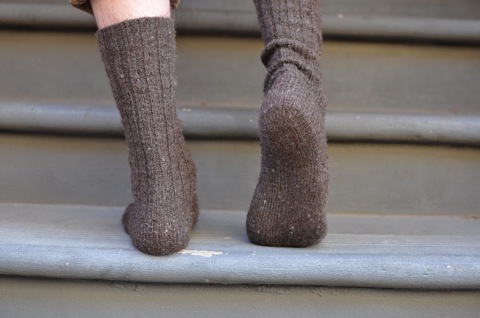 One thing about the yarn I didn’t care for was the smell when I was blocking the yarn. Because of the lanolin content I was expecting a wet sheep smell, but as soon as it hit the water, it gave off a pungent camphor/petroleum smell. It was so strong that even though I was blocking it in a room with the door closed and the window open, the smell was still wafting into other parts of the house. Once the socks were dry the smell disappeared, but I’m not particularly looking forward to their next wash.

The pattern itself is fairly unremarkable, it’s just a fairly long (4.5 inch cuff, 12 inch leg) sock with a dutch heel (which, incidentally, seems to be Matt’s preferred heel type. Just so you know). The pattern book was published in 1940, so it’s unsurprisingly quite utilitarian in its design. The only modification I made was to pick up more stitches along the heel flap and increased the number of decrease rows to account for those extra stitches.

All pretty straightforward, but a lovely result nonetheless.

The start of sleeves

This week’s goal was to get to the major increases on my dolman sleeve cardigan. The only impediment I had to reaching my goal was the weather. It was absolute stinker of a week in Melbourne, with hot days, hot nights, crowded trains and general (in my mind, justified) moaning about the weather. Knitting in this weather wasn’t fun, and I did question my sanity many times, but I plugged along and juuuuust made it to the major increases yesterday. 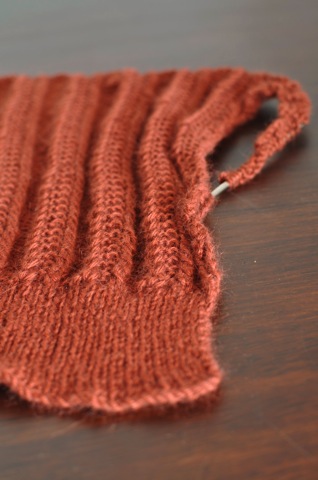 The upside to spending a lot of time working on the cardigan is now I really know the pattern. I’d mentioned before that it was a fairly easy pattern to remember, but it turns out I was lying a little bit. I found the basic structure easy to remember, but there are two mirrored twisted stitches close to one another that I had a lot of trouble committing to memory. I’m still occasionally having to rework the twists, but a lot less often than I was earlier in the week.

Now I can start to see the sleeves coming along on the cardigan, I want to keep going. So, next week’s non-binding, no consequences goal is to finish the sleeves. That does mean working on 224 stitch rows, but it’s at least going to be a lot cooler this week. Small mercies and all that.

Last year my crafting output could be charitably described as ‘minimal’. This was for various reasons, but one of them was lack of focus. Projects would be picked up and put down after only a couple of rows, and nothing seemed to get finished. This year, I’m trying a different tack by having little crafting goals for each each week. Being a fairly risk averse person prone to chronic bouts of dufferism, each week’s bar is going to be set pretty low. There will be no death-defying crafting stunts going on here.

Not only did I achieve my completely non-binding, no consequences goal, but completely overachieved by finishing the whole piece. 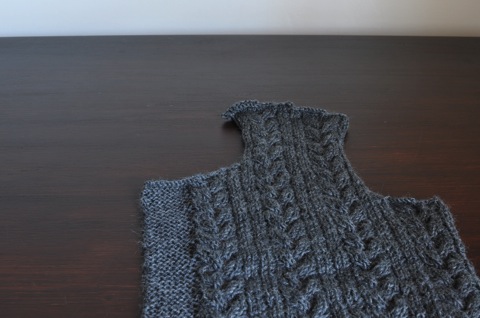 The more I work on this project, the more I’m drawn in by its knitted web of charms. However, its progress is going to slow a lot now I’m on the second front piece, which requires a row counter to keep track of when buttonholes need to go in.

Next week’s goal is slightly more adventurous: getting to the major increases for the sleeves on the dolman sleeve cardigan. There aren’t too many rows to knit to get there, but there is row counting and this weather forecast to contend with: 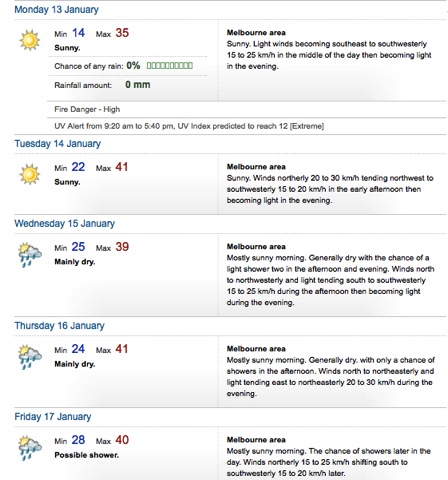 Over the last couple of weeks I’ve been debating whether to do a round up of 2013. I like reading round up posts, it’s nice to see how people have felt about their year. Also, there’s something cathartic about summing it all up; it packages everything up to be stowed away for (possible) future reading and remembering.

This time I’ve got a case of the ‘don’t wannas’. My knitting output was minimal, and outside of knitting there’s just some happenings that I’m not ready to think or write about. So instead of an end of year review, I’m going to postpone any reviewing until July(ish), which will mark one year since the start of a year of vintage knitting. It’s quite a convenient way to procrastinate, but I’m using it.

I’ve still got a couple of FOs waiting for their moment in the bloggy sun, but before I get around to that, here are the projects that have followed me into the new year.

I cast on Tri-Cable Stitch Jumper from A Stitch In Time Volume 2 as soon as Variation on Cable Stitch was done. It’s got all the hallmarks of a slow knit, with all its cables and ribbing and 4ply yarn and small(ish) needles, but it’s flown off the needles. 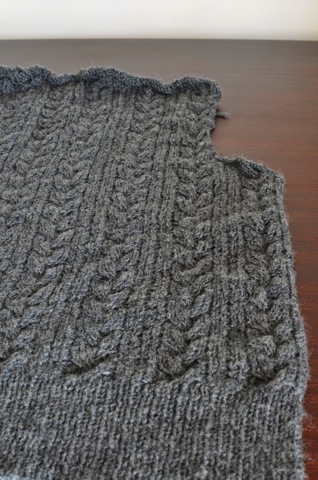 A lot of that has to do with the yarn, Patons Dreamtime 4ply, which is pretty much the perfect charcoal grey and a delight to look at. It’s a surprising colourway for a yarn that I thought was a baby yarn, but I’m not complaining.

The button bands for the front pieces are knit with the front piece, which has caused this weird little lip at the bottom of the piece. It’s a little bit annoying but I think I’ll learn to live with it.

The other project I’m working on at the moment is a dolman sleeve cardigan from Lee Target (pattern available from Skiff Knitting). The yarn I’m using for this projects is some rusty 8ply pure alpaca Matt’s mum gave me a few years ago. 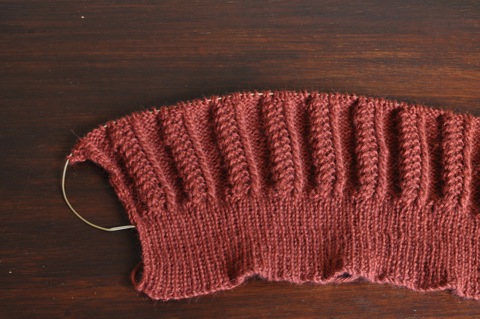 The pattern is easy to remember but requires enough concentration that it’s not really autopilot knitting. It’s knitting up pretty quickly at the moment, but the combination of yarn and stitch pattern means it’s difficult to count rows to space increase rows correctly. Luckily, I know of a good row counter to do the remembering for me.

I really like the colour and how the pattern’s coming up in this yarn, but there’s the quiet concern about how it’ll hold up once it’s finished. There’s no doubt that it’ll pill like the dickens, but given it’s alpaca, I’m somewhat concerned about how much it’ll drop. I’ve mitigated that risk a little by knitting it at a tighter gauge, but time will tell how well it’ll wear.

There’s one more project that I’m working on, but it’s within a hair’s breadth of being finished so I’ll hold off until it’s done and ready for the great (in the loosest sense of the word) reveal.

How have you brought in the start of the year, craft-wise?