Over the last couple of days I’ve been thinking about my crafting year, and haven’t felt particularly compelled to write a post. However, for posterity, it’s probably a good idea to write down a few words. 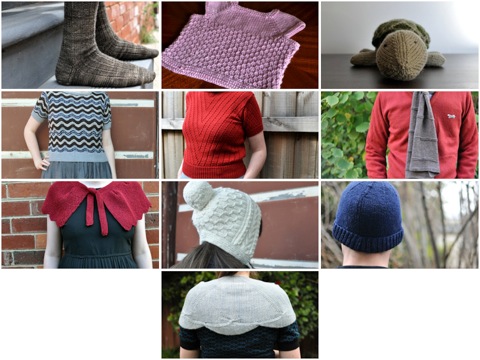 This year was again a fairly quiet knitting year, filled mostly with relatively quick to knit accessories and not one jumper to speak of! Using Ravelry as the definitive source of my knitting productivity, all of my finished objects were fun to knit and featured elements that kept me interested (even the very basic stockinette stitch beanie I knit in July). Some of them, Jan and Wavy Line in particular, get a lot of wear. Seeing all the finished objects together made me realise something quite disturbing; there was a distinct lack of grey yarn. Before you start fretting about the future of grey in my wardrobe, let me assure you that there is some grey yarn at the top of my stash, ready to go for next year.

There are quite a few WIPs lying around the house, more than I care to contemplate. Late this year I broke my slightly arbitrary ‘only two WIPs at a time’ rule, thinking it was a temporary measure so I could keep knitting on my commute to and from work. However, I overestimated my enthusiasm to finish up those WIPs. As keen as I am to start on the year of vintage patterns, my first job next year will be gather the unfinished knitted objects that have been artfully strewn around the house and finish them. An exception to this is my wretched Pickadilly Cardigan, which needs to sit in the corner and think about itself for a little while longer. I never thought I could harbour as much animosity towards an inanimate object as I do with Pickadilly! In general I consider myself a relatively patient knitter, but that project has had me on the expressway to tantrumtown a number of times.

Aside from knitting, I made (another) tentative foray into sewing. This attempt seems more successful than the last, even though the projects I took on were all pretty basic. Despite being fairly simple, I use them often (with the exception of the baby bootees) and I’m still quite happy with how they all turned out. As with my knitting projects, I’ve got a few sewing WIPs as well that I need to finish before starting anything new. Hopefully next year I’ll be able to start doing something about that fabric stash of mine.

Now that I’m here on the last day of 2012, I don’t really know how to describe it. From a crafting and non-crafting perspective, it wasn’t a bad year. However, I couldn’t say it was a great year either. Let’s just split it down the middle and call it neutral.