An unavoidable by-product of knitting and sewing is all the little scraps of yarn and fabric that are just too short or small to be useful. There’s always a twinge of sadness when I collect all the scraps up and put them in the bin. It’s almost a sense of mourning, like they could be used for something else. Turns out that ‘something else’ is a draught stopper. 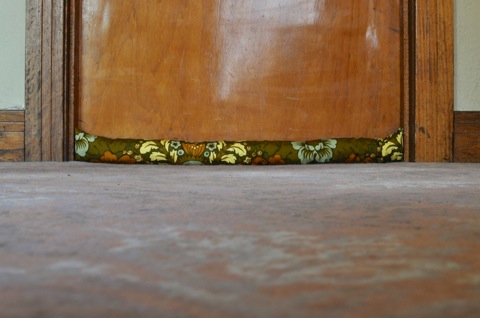 We live in a fairly draughty house, but our ability to do anything about the gaps under the doors is limited because we’re renting (if we owned this house, that carpet would be a distant memory). Draught stoppers can be purchased fairly cheaply at the supermarket, but at least this way I can pick the fabric, customise the height and length and feel satisfied that those little scraps are no longer wasted.

Even though it’s a ridiculously simple project (it’s just a stuffed tube of fabric, after all), I’ve found that I can use it as a pseudo-rubbish bin, slowly filling it with scraps until it’s at the right length. It does mean that it can end up being a bit lumpy as some scraps pack in a bit tighter than others, but if it’s just sitting on the floor stopping the cold wind from entering the house, I don’t think that matters too much.

For a mildly harebrained idea, it’s worked well so far. It’s only yielded one draught stopper, but even just that one is making the house less breezy, and I feel less guilty about the amount of fabric and yarn scraps I produce.