The stripes have it 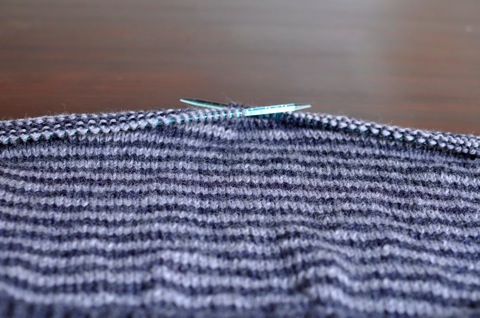 Thanks everyone for your opinions on how to proceed with the vest. As you can see, the stripes won.

Despite my rash claims that there was nowhere near enough yarn, there may have been *just* enough to make the vest in one colour. However, I’m not much of a risk taker and having non-matching sections from different dyelots simply wouldn’t do. The gentle prodding in the comments and the fact the two greys look good together may have also played a part in the final decision…

Initially I was a little concerned that the two-row stripes were a bit wide, particularly because I envisioned stripes a la Treeline Cardigan. As I’ve knit more and more, the stripes seem fine as they are. Who knows, with my current enthusiasm, this may end up being my last finished object for the year!

4 Responses to “The stripes have it”