Pip is hosting a week of favourite things, and I thought I might join in. 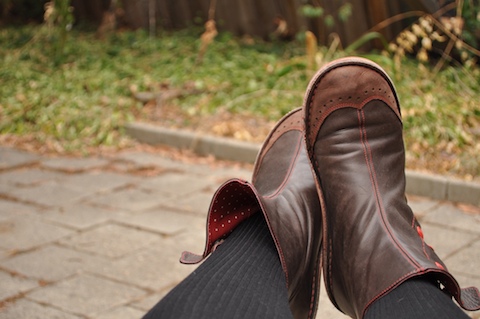 Technically these aren’t shoes, but ‘my favourite footwear’ just doesn’t have the same ring to it. The day I bought these boots, they were my little rays of sunshine on what was a frustratingly annoying day. My partner and I were in Melbourne so he could have an operation done. The day I bought the boots was the day he was due to go into surgery, but we received a call cancelling the surgery less than an hour before he was due to be admitted. We quickly booked flights so we could get back to work asap, but had the rest of that day to ourselves.

To try and relieve the annoyance, we wandered around the places we used to hang out when we lived in Melbourne. It was then that I came across my boots. I loved them as soon as I clapped eyes on them, but was a bit put off by the price. After an hour of deliberation I bought them, and the rest is history.

Even after owning them for a year and wearing them lots and lots, they are still my rays of sunshine distilled into footwear. The detail on the toes, the bright red buttons and stitching, the polka dot lining, all those little things about my boots make me smile. They were worth every penny.

4 Responses to “My favourite shoes”