Thankyou for the lovely comments about my sewing exploits. Fingers crossed its warm enough this weekend for its public debut.

Georgie tagged me for the seven random things meme. How I chose the things wasn’t particularly random, in fact it’s very much a deliberate attempt to not come across as a complete weirdo, or be a list of embarrassing childhood anecdotes that you would expect a parent to roll out at an 18th or 21st.

– I love Nintendo. I never had a video game console as a kid, so as an act of adult rebellion, I promptly bought myself a NES from an op shop shortly after leaving home. Take that, parents! The collection has expanded, and I now also own a SNES, a Nintendo 64, a Gamecube and a Wii. I do have other non-Nintendo consoles, but they pale in comparison. I don’t really play them anymore as I don’t seem to have the time, but it’s comforting to know they’re nearby. As a bonus piece of info, my favourite game is Yoshi’s Island on SNES.

– I have an irrational hatred of bananas. I fully admit that it is irrational, and I have tried tried tried to be at least a little accepting of them, but I just cannot stand bananas. The taste, smell, texture, the look of the banana peel, the sound of people eating it, everything. This is an aversion that does not discriminate, as it extends to lolly bananas and banana chips.

– The Poppy is my favourite flower. As a happy coincidence, they are out in bloom around my birthday, which is nice. So this isn’t a photoless post (and to bulk out this ‘thing’ as I’ve not got much else to say about it), here’s a couple of photos of poppies I took in Melbourne when I was down there for my birthday this year: 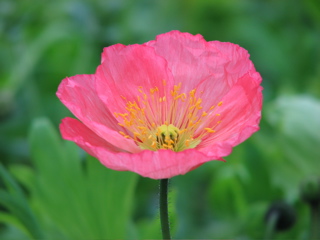 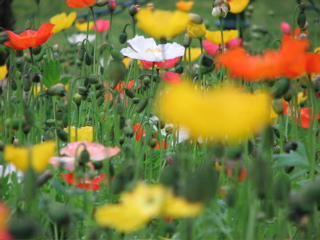 – My life’s ambition when I was little was to be 6 foot. Nope, not a fireman, or a marine biologist, 6 foot tall was the only goal in my sights. Unfortunately I missed out by 2 inches.

– I can watch the same movie over and over and over and over and over again without getting sick of it. In 2002 I bought Amelie on DVD, and watched it once a day for nearly a week. I still love that movie, and could still watch it over and over. On the other hand, I’m not very good at watching movies that are ‘must sees’ at the time. I haven’t seen a Harry Potter movie, but I have seen Jurassic Park and the Sixth Sense, however they were dubbed in German.

– I’m good at writing lists, but atrocious at actually doing the things on the list. I’ve been trying hard to get better at actually crossing off items from any lists I make, but I still find lists written down everywhere, forgotten and unloved.

– I once won $60 in a Home and Away quiz at a local radio station. I’m mildly repulsed by that now, as I was always a Neighbours girl. The winnings were wisely invested in an Australian cricket jersey which is still worn to the Boxing Day test every year.

As I’m fairly new to this blogging caper, I shan’t tag anyone specifically even though I know it’s a cop out. However, if there’s anyone who hasn’t done it yet and would like to, consider yourself tagged. Please let me know if you do the meme!