Unbecoming behaviour towards A Becoming Cross Over Line

This project was an excellent example of the gulf that sometimes exists between perception and reality.

I chose this project as my knitting travel companion for a holiday last year. The other contender was my Tri-Cable Stitch Jumper, that four-ply cable number from A Stitch In Time Volume Two. At the time, a cropped, mostly stockinette, 8ply jumper seemed to be the project that would cause the least amount of hassle while traveling around.

This is the point where my perception of the project became divorced from reality. In the few blog posts since coming back from the holiday, I’d mentioned the many hassles I’d had with the pattern. In the end, these are the modifications I made: 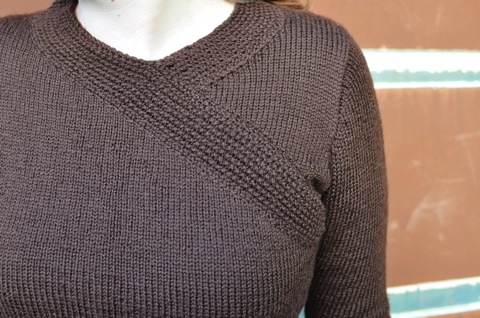 Once I worked out that I could seam up the neckband and still be able to fit my generously-sized head through the hole, I quickly seamed it up and called it done. The point where the sides meet up to make the v is very wonky and disappointingly unpolished, but there comes a point in some project’s life where it just needs to be finished. 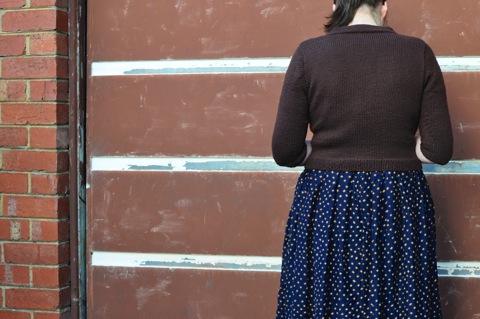 Despite feeling mildly exhausted and disappointed whenever I wear it, it turned out not too bad. I really like the length of the sleeves and the cropped length makes it perfect for the fit and flare dresses I wear it with. I most certainly won’t be making this pattern again, but cropped jumpers and cardigans definitely have a place in my wardrobe.

This jumper seems to epitomise the difficulty that sometimes comes with vintage patterns; when you run into trouble, you’re generally on your own. This time the battle was worth it, but lordy did it ever try my patience!