While we were on hols, the swatch mentioned in this post became the pieces of a jumper. It was my constant knitting companion, working on it while waiting to board planes/trains/buses, while on planes/trains/buses, while queueing and while having a rest from sightseeing. During that time, the friendship has had its ups and downs. At the moment, we’re on a break (as if the fold lines in this photo didn’t give that secret away). 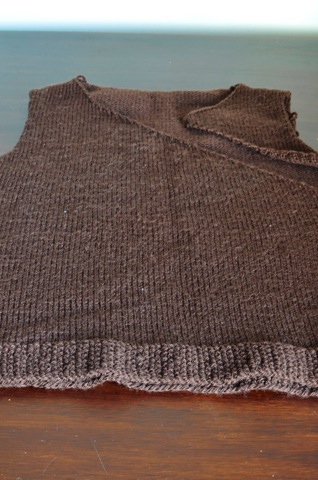 Since casting on in June, I’ve finished all the pieces, and when it’s finished, all pieces will have been reknit at least once. Rather than bore you with slightly whiny paragraphs, let’s get this over and done with via dot points:

I can’t hide my frustration, but it’s an impatient frustration rather than ‘I hate this stupid pattern and never want to see it again’. When I started seaming, I tacked the sides together so I could try it on. Besides the strangulation hazard it posed, I loved it. The body’s shorter than I’m used to, but it’s going to look great over dresses and with some of my high waisted skirts. I cannot wait to wear it, but the modifications required are just a bit too mentally taxing for me at the moment.

The problems seem to be a mixture of a few things. Part of it is just how the pattern works with my body type; which can be an issue with any pattern, irrespective of when it was published. The other part is related to details, or lack thereof, in the pattern.

The pattern doesn’t list a row gauge, which isn’t normally an issue when a pattern gives certain measurements to knit to. This pattern, however, is riddled with ‘knit x rows’-type instructions, so not knowing the row gauge is akin to flying blind and hoping for the best. It hasn’t really worked out so far, but there’s definitely enough good in there to keep me motivated.